Our inaugural Debbie Awards took place this week and what an incredible night it was celebrating the best, diverse and, crucially, unsigned new talent.

It meant there was a bit of a bun fight at the end – not just the usual eager young people handing business cards to senior execs – but rival execs hot-footing it to get to winners and nominees first.

Hannah Griffiths, a former Faber publisher and now in charge of finding stories and writers for All3Media, said she was overwhelmed by the quality on display in the All3Media New Voices category, which was won by Shivani Thussu (Paper) and was planning to start development conversations with some of the new writers who were celebrated.

“The All3Media prize has already delivered on its promise: we’ve found a writer we’d like to work with and been reminded that there are undiscovered writers out there who can take us to completely new worlds and inside the lives of characters who aren’t often represented on screen. To be involved with writers at this very early stage feels like an exciting new chapter for us.”

Diederick Santer, CEO of Kudos, presented the Debut Writer award to Sebastian Thiel (Just a Couple) and noted the impressive array of talent on display, spanning drama, docs and comedy.

The awards aim to give a vital first step to individuals who have no prior TV experience and come on the back of the successful launch of the Test Card Award at the Edinburgh TV Festival last year. “The volume and strength of these non-TX pilots made clear that there was scope for a standalone event to showcase the best emerging voices, whether writers, directors or producers. The standard of entries, the turnout and the industry support has been incredible,” said Lisa Campbell, Festival Director.

The night also marked the opening of the 2018 Talent Schemes. Said Scheme’s Director Campbell Glennie, “The Debbies join our existing schemes The Network and Ones to Watch in finding the next generation of entry level and emerging talent. We can’t wait to see the applications and we’re looking forward to meeting and supporting 2018’s brightest TV hopes.”

The awards took place at Rich Mix, Bethnal Green and were hosted by Femi Oyeniran.

Attendees were also treated to a sneak peak of a comedy from last year’s Test Card Award winners pilot – Katy Poulter and Francesca Marie Claire (Masked Pony Productions), with The Farm providing full post for the film, as well as attendance of craft sessions to learn some tricks of the trade.

Said CEO David Klafkowski: “The Farm is committed to supporting young and new talent across all aspects of programme making. Within all our facilities we nurture our own stars with robust training and development schemes.”

“As part of our ongoing partnership with the Edinburgh TV Festival, we are delighted to extend our support for emerging programme makers in sponsoring the Test Card Awards.  Last year’s winners, Katy and Frankie are currently mid-production on their latest short film Clean as You Like..

“I was very impressed with the level of professionalism displayed by all of this year’s entries. I know how hard it is to turn a creative idea into a reality.”

Channel 4 were the recipients of the Best TV Company for New Talent on the strength of initiatives such as nationwide careers fairs, screenwriting workshops and apprenticeships with Stellify Media awarded a Highly Commended.

See our photos from the night: 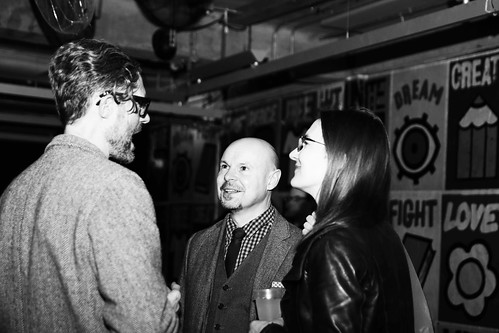